Hundreds of Panna Knock Out participants create a lot of spectacle during the Voetbalfestival!

Last Saturday, we hosted the biggest street football tournament of the Netherlands during the Voetbalfestival in the Jaarbeurs in Utrecht. This tournament is powered by our partner Aktiesport! In addition to participate in the Open NK panna tournament for everyone, there were also unique freestyle and panna shows, given by two-time World Champion Panna Easy Man, World Champion Groundmoves Nasser el Jackson and Dutch Champion Freestyle TOMV. 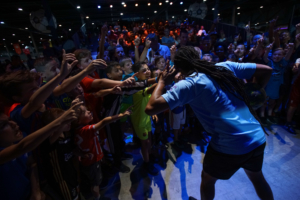 Open NK
The day started with the Open Dutch Championship panna. Everyone was given the opportunity to register for this tournament and the search for the new panna king of the Netherlands was made. This tournament was divided into two age categories; up to 15 years and 16+ with more than 400 participants! The final in the age category up to 15 years was between two players from Rotterdam, Saajan El Jackson and Mehmet Ezer. In an exciting final Saajan defeated Mehmet with a crazy panna, while Adi managed to win in the final of the age category 16+ by scoring more goals! The winners received great prizes, such as a clothing package and a shoot with Aktiesport. Finally, Adi was able to compete against 31 other top street football players from the Benelux during the Benelux Cup, which took place later that day. 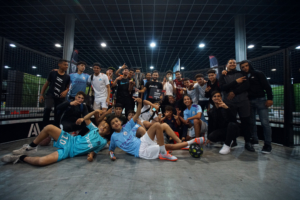 Benelux Cup
Big names such as street football legend M10, the Belgian Panna Champion Evrim Nallar and youth World Champion Panna Mehdi Amri were also present at the Benelux Cup. This offered a guarantee for spectacle! After a day full of pannas and crazy actions, the final went between Evrim Nallar from Belgium and Abdollah Tribak from Tilburg. A final full of excitement, in which Evrim finally came out as the winner by giving Abdollah a sneaky panna! The rules of the street remain guaranteed, a panna means Knock Out, game over! Evrim won a nice money prize and received a ticket for the international top tournament, the Panna House Invitationals, which will take place on August 18 in Denmark. 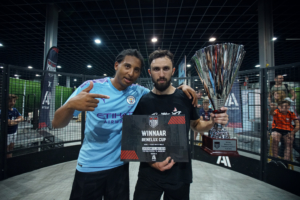 All Styles Knock Out
In addition to the our panna competitions, there was also the All Styles Knock Out Championship. Players competed against each other in the box ring, where each player had three rounds to prove themselves. With unique battles, the All Styles Knock Out has provided top entertainment all day long with 16 of the best freestyle and groundmove players from the Benelux, including some very talented ladies. The battles were judged by a top jury consisting of; Dutch Champion Jesse Marlet, triple World Champion and two-time European Champion Soufiane Bencok and Dutch Champion Tom Vegter.

A lot of exciting battles, with Nasser El Jackson finishing on the third place. The final went between Mart Pool and Bailey de Regt. After they both showed their best skills, the jury could prepare for a difficult decision. Mart Pool was ultimately selected as the winner of the All Styles Knock Out final!

WHAT A DAY 🙌🏽! Check out this great aftermovie of the @voetbalfestival where we hosted the Dutch Championship Panna Knock Out, Benelux Cup and the All Styles Championship powered by @aktiesport.nl 🔥💪🏽 Football is LIFE, panna is ART ⚡️