Sarah Khiali: “I will work hard and do my best to keep my title, but it will be a big challenge.”

We’re here with the first Panna Knock Out Ladies World Champion. Sarah Khiali, part of the Pannahouse crew from Copenhagen!

Could you tell us a little bit more about yourself?

My name is Sarah Khiali, also known as Sarah Khi. I’m 20 years old, and a part of the Pannahouse crew. It all started a little over a year ago, when I first started playing street soccer.

Who or what inspired you to play street football and panna

I knew what panna was a long time before I started playing, but I was busy playing grass soccer. But then I started coming to Pannahouses new home court “street under buen” where I saw all the boys from the crew with their insane groundmoves. At the start I didn’t even want to play but then Jacob took me under his wings and taught me simple groundmoves. So, I will say it is a combination of the whole Pannahouse crew and especially Jacob who taught me some of my first groundmoves and presented the panna and groundmoves for me.

This year was the first edition of the Ladies World Finals, how did you experience this?

I loved it. It was an amazing way to give a bigger scene to the female street soccer players. I think it was over my expectations. Hopefully more tournaments for female players  will keep coming, even though i like to participate in tournaments for everyone.

What went through your mind when you became world champion?

I had so many thoughts I was so happy and proud. But at the same time I was  relieved and it showed me all my hard work paid off. So much love to my pannahouse family, couldt have done it without them.

I don’t know, there are a lot of good female players out there, so it will be tough. But I will work hard and try my best to keep my title. But it will be a big challenge. 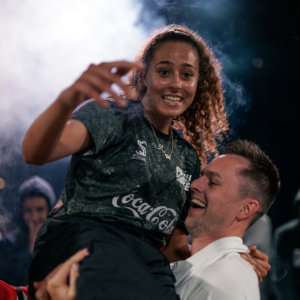 It must be Noah Kofi, because of the way he moves on the court. For me a tough opponent is someone who moves and uses the court’s size. And of course, gives me pannanoia at the same time.

Where do you think the female street football/panna scene will be in 10 years?

I think it will grow, and hope it will. But I think as more girls play, then it will grow automatically. Hopefully one day the female street soccer/ panna scene will be so big that everybody knows the sport. Not only that I also hope the female panna scene will be at the same level of the best male players. Then there will not only be boys at the top 16 at the tournaments.

What would you tell your fans if they want to become ‘the next Sarah Khiali’?

For me when I started it was all about playing because I liked it and because it made me happy. Not because I wanted to be anything or anyone, I started because I loved it. Then I chose to put a lot of work in it.  So if you want to be “the next Sarah Khiali” then do what makes you happy. And put a lot of work in it.  Just be yourself, that’s what I like the most, you can express so much just by doing your thing.