Bailey de Regt: “From that moment on I was sold!” 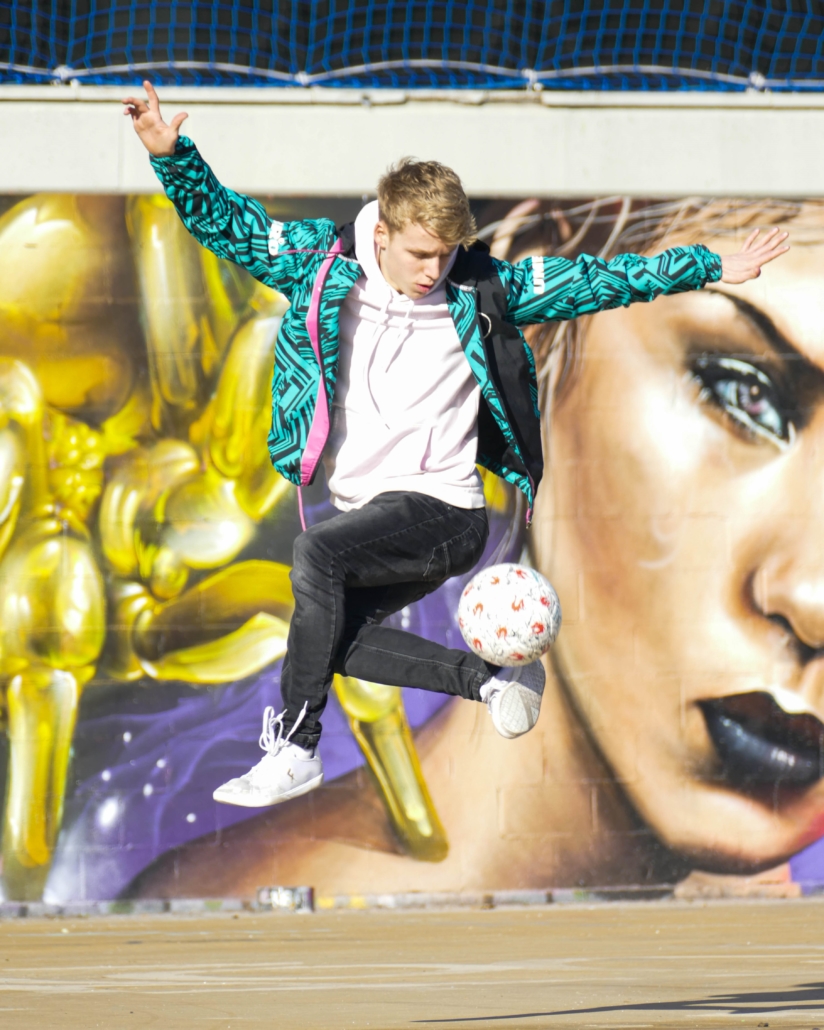 Today an interview with one of the best freestylers from the Dutch community. Bailey de Regt has been playing football all his life and has switched to freestyling in one moment. He still has a lot of goals that he wants to achieve. In this interview you will get a better picture of who he is.

Would you first like to introduce yourself to the audience?

Let’s do it! My name is Bailey de Regt, I am eighteen years old, and I come from Papendrecht. My greatest passion is freestyle football and I also love film, photography and travel. After graduating from high school last year, I decided to take a gap year to fully focus on freestyle football!

When did you start freestyling?

Football always played a very important role in my life. From the age of four I did almost nothing else and at the age of fourteen I was scouted by FC Dordrecht. I trained there five times a week at the club, played a game once a week and also trained at a football school on Sundays. At this football school there was a technique trainer, Jano Calor, who could keep the ball up with his heels and from that moment on I was sold! I went to practice at home to show him a cool trick the following week. Without realizing it, I rolled into a completely new world …

Which countries have you visited through freestyle and where do you want to go?

The first foreign freestyle football tournament I participated in was Lubasz Freestyle Night in Poland. Then came the Czech Republic, where I participated twice in the World Cup, Spain and Germany. You often take these trips abroad with other freestylers and that is what makes it so special. I had many other trips planned for this year, but I am afraid that the corona crisis will throw a spanner in the works. I would love to take a train trip through Scandinavia and backpacking in Asia, of course with my ball! Hopefully this will be possible soon.

Where do you see yourself in 5 years with Freestyling / what would you like to achieve?

The most important thing I find fun with freestyle. As long as this is there, I will do everything I can to train as hard as possible and make as many memories as possible with cool people. And if I could ever become Dutch or World Champion, that would be great!

What is the coolest freestyle event you attended?

Superball. I think that is the only correct answer. 500 freestylers from all over the world meet in Prague for the World Championship. Not much can compete with that …

Who was / was your example when you were small, so you started freestyling?

Jano Calor, the technical trainer of the football school where I regularly came, was the first freestyler I came into contact with and inspired me to freestyle. Furthermore, I have never really had an “example”. I do have freestylers that I really appreciate, like Kosuke, Kazane and Yo from Japan, or Andrew from England. These are freestylers who inspire me. I can also get a lot of motivation from other urban sports, such as break (break dance). The energy of the dancers is really next level and we can also use some moves in our freestyle sets!

What does a day in life look like to you?

Because I have a gap year and will only be studying next year, I have plenty of time for freestyle football. I get up around 7:30 am and have breakfast with oatmeal, fruits, seeds and nuts. Then I take an hour to learn Spanish. Then my first freestyle training of about two hours starts. Then I have lunch and I have the afternoon to respond to emails, give a freestyle football lesson at a primary school or edit a video or photo for my instagram (@baileyfreestyle). Then I pick a recipe and start cooking. In the evening a second training of about an hour and finally resting on the couch. That’s it!

What are you looking forward to in the upcoming period?

The virus is now just as chaos. Almost all assignments that I would have in the coming period have been canceled. It is also unclear whether planned competitions such as the NK and WK will take place. Let’s see … Fingers crossed!