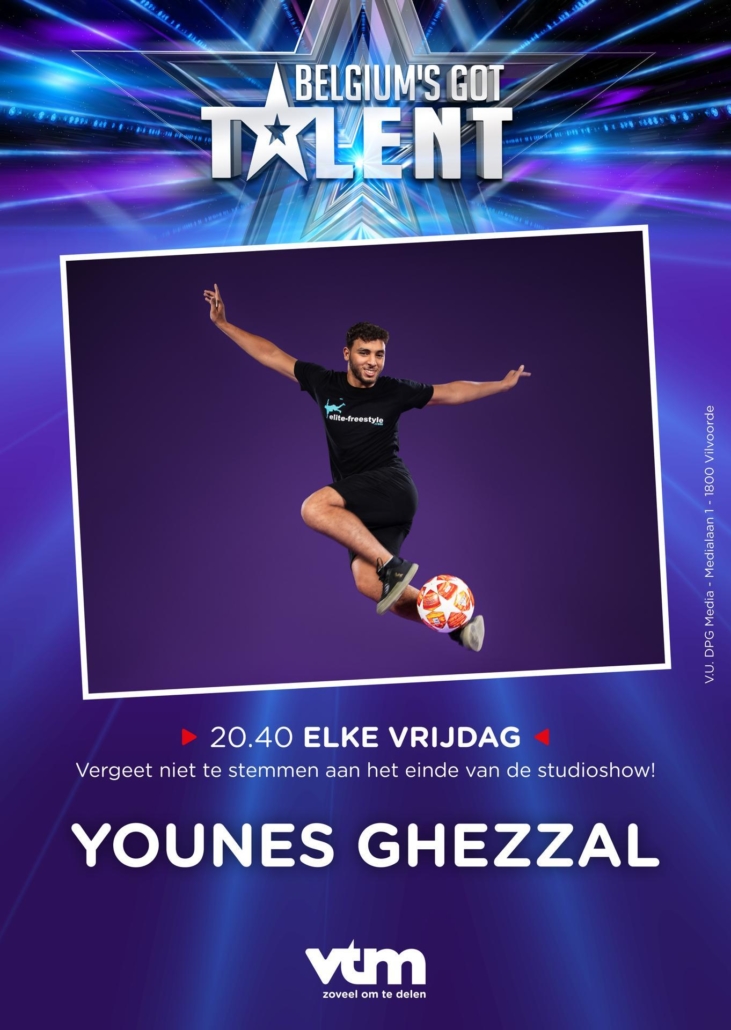 First of all, who are you, where are you form and what do you do in your daily life?

My name is Younes Ghezzal (Youniceff). I’m 21 years old Belgium guy from Ronse. I study, I’m in year two of my bachelor education, sport and movement. Besides that, I play freestyle football for four years. I also play field football since my sixth. I’m in the show of Belgium’s Got Talent 2019.

If we take a look at Belgium’s Got Talent, how did you come there to join, and did you have a threshold?

Youniceff had already heard of the program. I also noticed that several people in my friendsgroup had registered for Belgium’s Got Talent. This made me think, why not? I should try it too. Well then, I did register myself for Belgium’s Got talent. For sure there was a threshold for me to participate. My thoughts were to cancel the whole show a few days before my audition. This because I was afraid of giving a show to so many people and cameras. It all changed when I had a good conversation with the casting director. He holds on and convinced me to go on audition. Above all this was a good decision, I don’t regret till today. Because the audition brings me, with some luck, a beautiful moment.

Wat was your main goal of your participation at Belgium’s Got Talent, did you have a specific purpose with freestyle football?

How is the participation at Belgium’s Got Talent so far off, have you done a lot of auditions so far?

First of all, Youniceff have to show videos with my talent. So, I sent some videos of me freestyling. After that I was invited for a pre-selection. Here I had to give a show to the director and other staff. In this pre-selection it was important to show them everything you got. This brings me a spot in the TV auditions of Belgium’s Got Talent. So, I was holding an audition for 2000 people, a jury and multiple camera! Insane experience! In my show I tried to break a record. The record of hold up the ball as many times in one minute. To break the record, I had to reach the 100. First, I was unfortunately not through to the next round. The reason for that was that my attempt to break the record failed. From the jury I got two times a ‘yes’ and two times a ‘no’, so I didn’t go through. The presenters of the show, Koen Wauters and Laura Tesoro thought otherwise. They called me back on stage. Where they put on the ‘Golden Buzzer’! As a result, I got straight to the semifinals, where I am now. A very nice story and experience.

What are you been up trying to get back in your show, is it hard to get every show something new with freestyle football?

Youniceff tried to break a record in my audition. The record of hold up the ball more than 100 times in one minute. I failed, I reached 93. The reason for that was that I put some crazy trick in the show. I spent much time on finding something creative. After a few days and meetings with my best friend, I did find something nice. I can’t say something about it, because it will be broadcasted on november 29th. But the show will be really sick, don’t forget to watch 29 november.

A golden buzzer at Belgium’s got talent is fantastic news for you, how do you prepare for the semifinals?

The golden buzzer was an incredible feeling. I still can’t believe it. I was really busy last month practicing for my next show at Belgium’s Got Talent. This wasn’t always that simple. I suffered an injury. I trained that much that I suffered a groin inflammation. Luckily, I am healed recently. So, I can train fully again. I can’t wait for the day of my broadcast. I’m too excited that Belgium can finally see what I can do with a ball. In the meanwhile listen to Youniceff his playlist!

Click here to to see Youniceff his freestyle football show at Belgiums Got Talent!