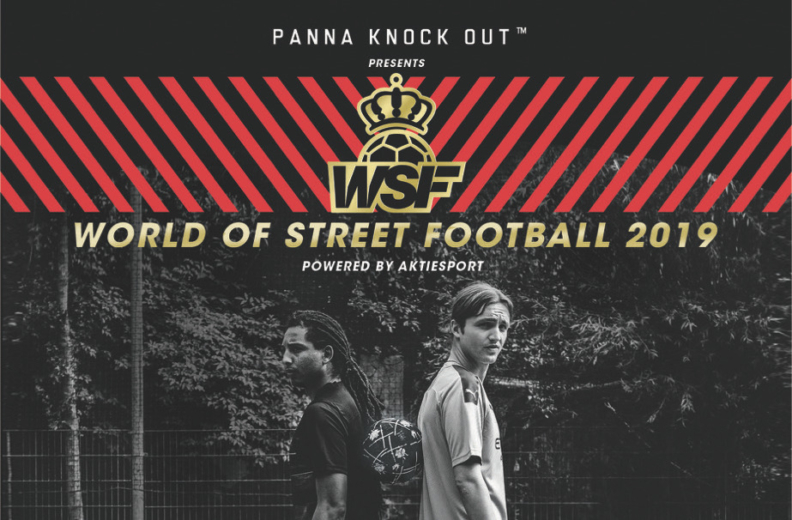 The legendary World of Street Football (WSF) tournament will return to it’s hometown Rotterdam on the 14th & 15th of September 2019 during the Rotterdam Street Culture Weekend. This weekend will be full of every aspect of street football including Panna Knock Out, 3 vs 3 and freestyle. Kevin will be there on Sunday to perform the Panna Knock Out Anthem ‘Kilometers’.

SATURDAY THE 14TH OF SEPTEMBER

The best of the best talented ballers will face each other in the cage. The fresh Pannahouse Invitationals champion Jassim from Belgium will compete, together with confirmed names like Jem from the UK, Omar Hamouta from The Netherlands, Yuto Fujimoto from Japan and Rawi Miled who’s also from Belgium. You don’t want to miss this!

No registration, invite only.

PANNA PRO LEAGUE
The selected top 16 of the Panna Knock Out World Championships will face each other in the Panna Pro League:

3 minutes, 3 players, 2 goals. Nothing else is needed for old-school 3 vs 3 street football. It all comes down to skills, tactics and a killer mentality. The winners take home € 300,- & a ticket for the All Stars 3vs3 tournament on Sunday with teams from all over the world.

Registration: info@pannaknockout.com (€ 50,- per team) The winners of the Willems, Wijnaldum, El Khayati and Roya Cup don’t have to register and are already qualified.

SUNDAY THE 15TH OF SEPTEMBER
WORLD CHAMPIONSHIPS PANNA KNOCK OUT
3 minutes, 2 players, 1 ball. Nothing else is needed to see mind-blowing akka’s, skills and panna’s. The game Panna Knock Out doesn’t need any introduction and street football’s finest players from all over the world will represent their country this tournament.
Winner takes home € 1.000,- , the title of World Champion Panna Knock Out 2019 and a whole lot of respect.
No registration, invite only.
INTERNATIONAL FREESTYLE KNOCK OUT CHAMPIONSHIPS
Freestyle is the art of juggling a ball in every way possible. This sport is taken to new levels the past few years and mind-blowing tricks and combo’s will be seen during the International Freestyle Knock Out Championships.
Registration: Invites & info@pannaknockout.com
3 vs 3 ALL STARS TOURNAMENT
16 teams from Japan, Denmark, Germany, the Netherlands and the United Kingdom will battle each other in the 3 vs 3 court. All legends and big players are invited so skills are guaranteed.
No registration, invite only.

A lot of Skill Games like the ICON, Football Darts, Smartgoals and Precision Wall will be there free to play. By playing these Skill Games you can unlock the FIFA19 area where you can virtually destroy your opponents in a game of FIFA.

Nobody less than Kevin, who’s a baller himself, is coming to perform his tracks at World of Street Football. Kevin has played 11 years in the youth of Dutch 1st league club SBV Excelsior before his career as a rapper exploded. He expressed his love for football and street culture in the track ‘Kilometers’ together with Lijpe. This track has been released as the Official Panna Knock Out Anthem so it can’t miss out at WSF.

World of Street Football is part of the Rotterdam Street Culture Weekend that will take place from September 13th till September 15th 2019. With international and home grown street art and sports, Rotterdam breathes street culture! Check out www.rotterdamstreetculture.nl