For many years they were playing day and night on the street football squares; Professional football player Jetro Willems and his youth friend Iliass Tajdirti. Years later they noticed that kids are playing less football on the streets. Also the fact that less activities are organized for youth above the age of 14 made them decide to change this situation. They contacted the Foundation Urban Culture Lab to change this issue together.

That’s why the first edition of the Willems Cup took place on Sunday 2 June. Jetro Willems, 22-time Dutch international, put himself as a role model for the Rotterdam Zuidwijk, the neighborhood where he grew up. Therefore the street football event , was hosted on “his” square on the Maldenburg. The purpose of the event; inspire youth to play more football  on the street. According to the 18-year-old participant Rachid this event succeeded. “ I meet new people and the new and old generation comes with this event together ‘’. 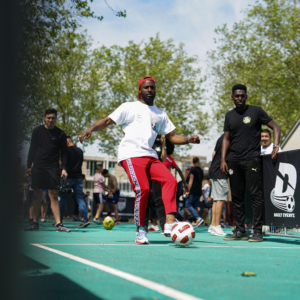 Despite the Ramadan and a tropical 30 degrees more than 150 youth came to this football square. The event program consisted of 3 vs 3, Panna Knock Out and Fifa 2019, although you had to complete the first three physical Skill Games before you were allowed to play the last one. Also, you could test your skills against the Rotterdam world champion panna Jeand Doest, also known as “Easy Man.” In addition to the many youngsters who have come, the Willems Cup even drew international participants from London and Brussels to the Rotterdam Zuidwijk, which caused fraternization and cultural dynamics. 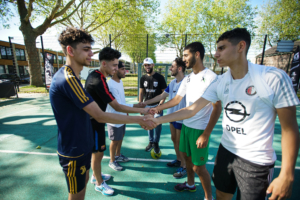 Willems has made a clothing credit available from his sponsor for the various winners, which created an exciting and sporting battle. “But still, I think respect for each other and the referee is more important than the skills and winning’’. That is why there is such a big prize for the winners of the Fairplay & Respect award, “said the 25 year old Willems. 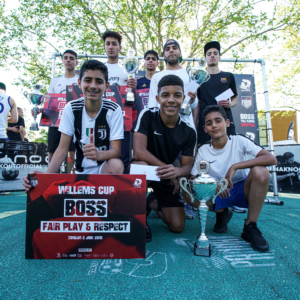 The event is based on the feeling that exists within the neighborhood. Less and less kids are active on the street football squares.  On the day itself, Willems says: “Actually street doesn’t exist anymore, nowadays it is more iPad, Playstation and watching vlogs. The intention is that Panna Knock Out and Daily Eventz will organize the Willems Cup every year in collaboration with the Urban Culture Lab Foundation so that youngsters can look forward to it. 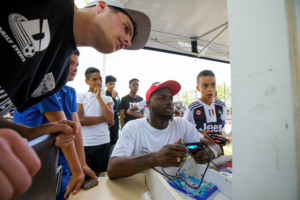 There is also interest from other professional football players to roll out a similar initiative in other Rotterdam neighborhoods, according to Tajdirti. In addition to the financial support from the Area Commission Charlois, Pendrecht district committee and Urban marketing agency Dr. WOOOW! remains the collaboration with local parties such as Sportbedrijf Rotterdam, Thuis Op Straat, DOCK and The JOZ Foundation is of crucial importance to the generally difficult to reach target group from above the age of  14 to activate and inspire, says Urban Culture Lab chairman Desi Beans. “This was exactly what we needed ”, Rachid concludes.