November 26th, the Ronaldinho Globe Street Tournament took place in Zaandam. The best teams of Europa battled against each other in a 3 vs 3 tournament. With the legend himself, Ronaldinho, who presented the award. A very nice event where not only Ronaldinho enjoyed the shows, skills, and other spectacle, but also a lot of other attendees from the scene.

The 3 vs 3 street football tournament brought us the best teams of Europa to Zaandam. This brings  a high level of street football. The teams battled for a place in the final in an insane setting like you see on the picture below. 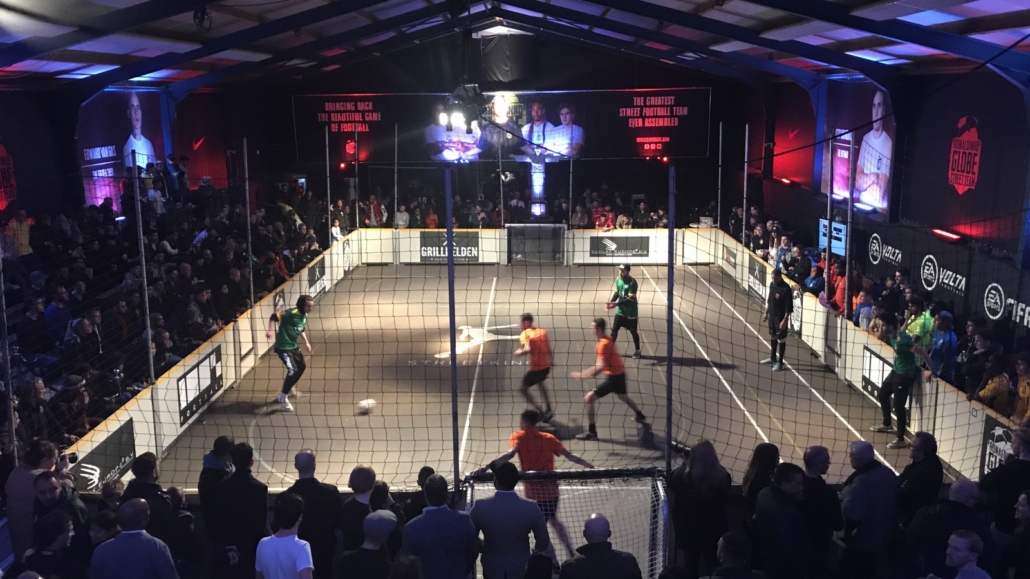 The final was played by the ‘Streetkings.eu’ against ‘Ghetto football’ from Latvia, this was a sick final with a very high level. Streetkings.eu took the win end became the winner of the tournament. They received the price from Ronaldinho himself!

Shows and other attendees

During the matches there were also a lot of shows full of entertainment, like the samba dancers who brought the Brazilian vibe to Zaandam. Also, there were some crazy freestyle shows and performances. This made the event even more complete. Additionally the Ronaldinho Global team including the ‘god father’ of the game Edward van Gils and Issy Hitman battled against the Creators FC from the Netherlands. A team full of famous influencers like vv Bas. This producesed some great footages.

Ronaldinho and other legends

Besides that Ronaldinho enjoyed the shows and competitions watching from the balcony. He also enriched the prices to the winners like we told. He was not the only legend who was present in Zaandam, also Jermaine Vanenburg was there to enjoy the event. It was a nice mix of the generation of legends in the game and the next generation at the event. This brought an incredible rise of people at the Ronaldinho Globe Street Tournament.

For many people Ronaldinho is one of the biggest in street football. Ronaldinho was the one who brought the skills and tricks to the field at big teams in Europe. A true inspiration to many street footballers. He also inspired Mohammed Reda who dedicate his stage name ‘’M10” to the shirt number from Ronaldinho. Also Fatih Hatipoglu was inspired to use one of the shirt numbers from Ronaldinho in his stage name, Fatih_49. This are examples of how big the inspiration of Ronaldinho is. As you can see below, Fatih’s reaction after giving the a handshake. He will never wash that hand again, haha!