DjuDju Ascension: ‘there is no sport as fun as street football’ 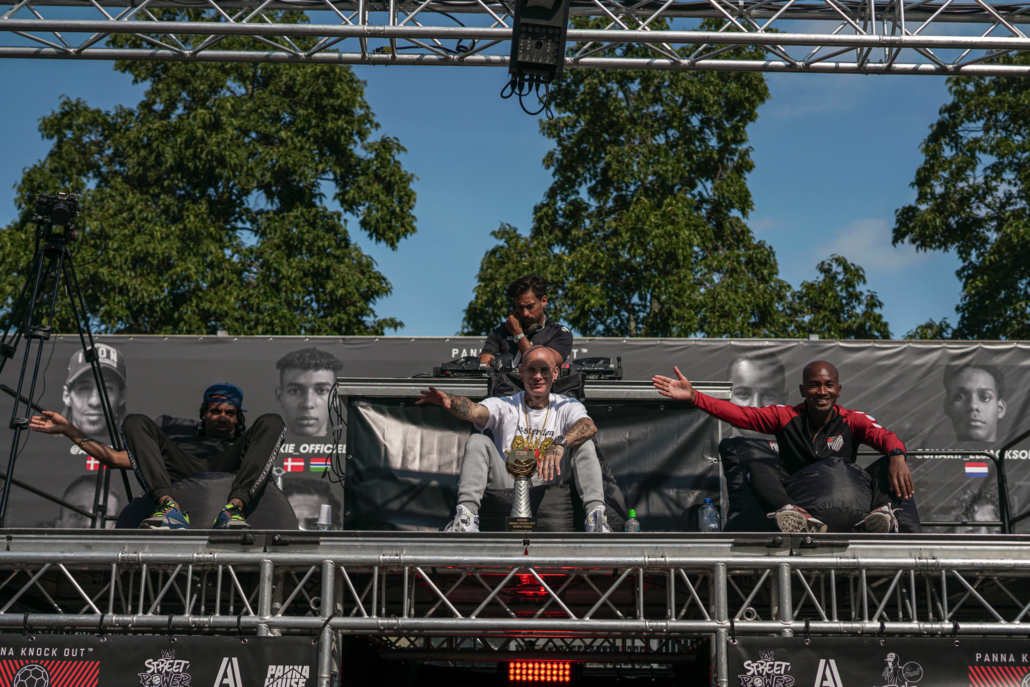 This week we have a great interview scheduled with Dju DJu (Djuric Ascension). When we think of street football, we think of Djuric. This living legend was born in the cradle of Panna Knock Out, and has been active in street football and field football full-time ever since. He has worked himself up from the streets of Amsterdam to a TV tour with Edgar Davids! Since then he has been closely involved with Streetkings; a football organization that helps inmates to reintegrate successfully. All in all, Djuric has had some great adventures. It would be a shame if these adventures weren’t told to the rest of the world … That’s why we had this cool interview with him! Do you think it’s an interesting story? It is! Read on quick.

You still play field football at a high level at AFC Amsterdam. What role has street football played in your football career?

Yeah! Right now I’m still playing at AFC Amsterdam. I am super happy that I can still keep up at such a great level and I am blessed with the great team that I play with.

STREET FOOTBALL has made me the way I am and the way I do now. I have been through a lot with my friends that I still play with today, from commercials to traveling all over the world. I have travelled to the most beautiful countries to play football, countries you never thought that you would play football. In these countries i’ve played football against other good football players on the squares.

That is how I think every major player started playing football: with your friends on the street.

We saw you judge with a big smile at World Of Street Football. What did you think of the entire experience at this event?

Firstly, I thought it was a super fun and beautiful event. I immediately got the feeling of the past when we also started playing at nice events such as Panna KO at the time it was even more popular.

It was nice to see how the youth of today take it with them and show their skills. There are also some very good players among them, which I had not seen in real-life yet.

I certainly enjoyed myself. Thanks to World Of Street Football and keep up the good work!

What was the highlight of the World Finals for you?

I think the highlight of the day were the Pannas that were made because there weren’t that many Panna’s anyway. And of course big up to Noah Kofi (Panna) & Jesse Marlet (freestyle) for winning the World Of Street Football.

It was a successful event!

What is the biggest difference for you between panna 20 years ago and now?

Now it’s more, in this day and age, that they give you the Panna from nearly a mile away so to speak and don’t even want the ball anymore. For me that is the biggest difference between Pannas from 20 years ago and now. But they hand out pretty creative Pannas though 👌🏽.

Who is the biggest talent in the scene for you at the moment?

For me the biggest talent in the scene is Noah Kofi, because he is so young & the winner of World Of Street Football 2020. He can call himself the Panna king now 👑!

Which 2 fellow players would you choose for a 3 vs 3 street football match and why?

This will always be Edward van Gils and Orry Promes. Those guys are my day ones that I have played with at so many places and in so many countries. We are still going strong with Streetkings. Major love for them.

You have visited many beautiful places with Streetkings! Which trip impressed you the most and why?

To be honest I have been to a lot of really nice places with Streetkings. What I still enjoy now is Hawaii. I don’t have to say more… if you pronounce the name, your mind will already start thinking about everything.

What does street football mean to you?

Street football is my lifestyle, that’s my life 💯.

With your experience, what would you like to tell the young people of today?

What I would like to share is: Enjoy the game every day for as long as you can. Play everyday with your friends because there isn’t a sport as fun as Street football!

To all the Panna Knock Out Fans: keep following Streetkings because there are still some great things to come in the future…